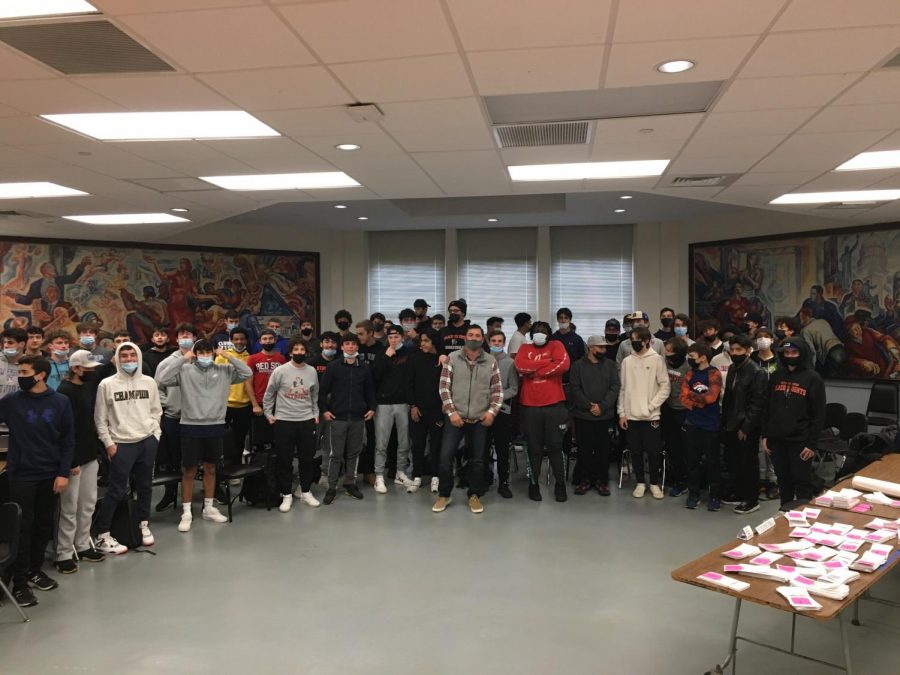 Patrick Murphy with the prospective baseball athletes for this season's preliminary meeting.

Patrick Murphy, a long-time Stamford community member, was recently named Head Coach of the Stamford High School baseball program. Earlier this year, teacher and former Head Coach Rit Lacomis stepped down after 20 years with the program to spend more time with his family. With the open position, Stamford Legion and Bobby Valentine Sports Academy coach stepped up to take the position.

I spoke with Coach Murphy about his new position here at SHS, and he emphasized just how excited he was to be coaching here. As a long-time Stamford resident, Murphy has always been involved with Stamford sports. From when he was little, he played little league in Stamford as well as Stamford Babe Ruth baseball. Murphy had also played varsity baseball for three years at Trinity Catholic High School in Stamford where he was honored as a 2011 All-FCIAC athlete and CT Select Junior team member.

Some of his coaches from those teams were SHS graduates themselves, making him feel even more connected to the program here. Murphy explained to me that after playing baseball for so long on so many different teams, and especially while playing his last season in college, he knew that he wanted to continue to pursue his passion for the sport from a coaching standpoint. Murphy explained that his last few years of playing really helped to develop his instincts and knowledge of the sport.

As for the Stamford High program itself, I asked Murphy if he had any major goals for the program this year, to which he gave two: to qualify for both FCIACs and States. Last year, Stamford’s FCIAC record was just 4-12, so there is a lot of work to be done before qualifying for States. Murphy plans to build up the team by working hard in the beginning of the season, which he believes will create a team capable of surprising many people. Recently Murphy has been in meetings with Athletic Director Christopher Passamano as well as former Coach Lacomis. According to Murphy his close work with Lacomis has left him with a team that already has many great things in place, leaving him with little restructuring to do.

Murphy also said that he is particularly excited to be working with the players here at SHS in a new position, as he was an assistant coach with Stamford Legion to many of them for the past 8 years. I got the chance to speak with one of his past players, Kyle Bancroft, a junior at SHS, who also plays baseball for Stamford High. In the past, he was coached by Murphy with Stamford Legion in 2019 as Murphy assisted in their State Championship win.

Bancroft explained that he thinks it is very cool that Murphy will now be coaching here. He said Murphy, “is a great guy and a great coach,” and said that, “he would joke around with you but he was also a great coach and a good guy to be around”. All in all, Bancroft explained that he’s happy to have Murphy as his new head coach here, and he’s a great fit for the position as he knows the guys and knows Stamford.