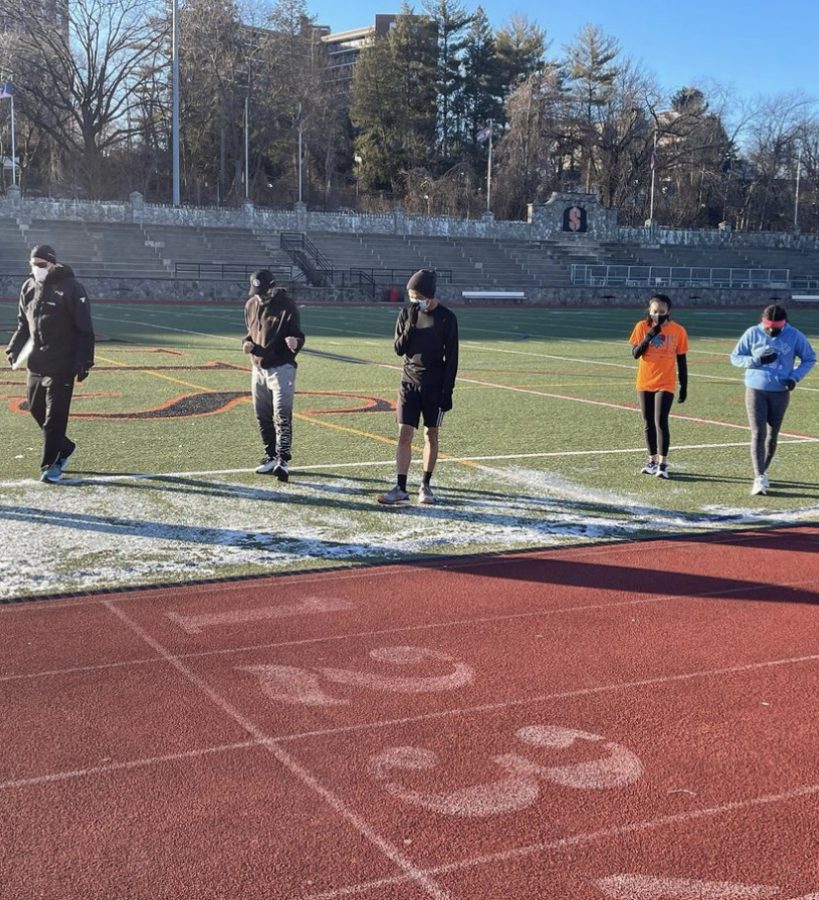 Stamford High School athletes have been thoroughly impacted by the adjustments schools have had to make this new academic year due to the COVID-19 pandemic–specifically the track team. This athletic season, track team members haven’t participated in an in-person (a new word we have all added to our vocabulary) meet this year, however they did get to experience a sheer track meet experience through virtual meets. You would expect these unfortunate circumstances to discourage track runners, however, through several conversations I have held with both runners and the track coach, students athletes have been making the best out of their situation.

Through my conversation with Beatrice Sarria and Nicole Martillo, two track runners at SHS, I discovered that both runners seem to be enjoying having no meets, “I like having practices with no meets because it keeps me in shape anyways and we all seem to enjoy the people we’re surrounded by.”

This is only a testament to how dynamic our student athletes are; although they haven’t been able to compete, they still enjoy running with their fellow classmates/runners, as well as the exercise running provides.

Sarria voiced her opinion on the situation, “I would say there is a point of having [practice because] there’s always room for improvement.”

Sarria demonstrates how although having no meets is unfortunate, it is important to still utilize the time during practice to improve your running skills and to become a better runner and overall athlete. Martillo expects to utilize practice time to improve in areas like stamina, speed, or throwing skills. Both Martillo and Sarria have thanked their coaches and their peers for pushing them to do better, a testament to the connections one can make through their sports team.

Some components of the “bad situation” Coach Scianna mentioned include: “bad weather…limited opportunities to compete…snow on the track for much of the season..training [was] difficult as well.”

It is important in times of distress and constant changes to be optimistic and to utilize the changes in your advantage, similar to what I learned through my conversations with the three people mentioned above; use the practice time to strengthen your skills as an athlete and as a coach.

Coach Scianna also commented on why the track team is still practicing if there aren’t any meets.  In his response, he mentions the opportunity to compete virtually, however bad weather limited even hosting virtual meets.

With all the negatives, Coach Scianna still demonstrated an optimistic attitude, “I think the indoor season turned into great prep work for the outdoor season and allowed for student-athletes to build their fitness over several weeks.”

When asked if he wished the team had meets this season, Coach Scianna responded, “at a level that is hard to mimic in a practice setting, it would have been difficult for the athletes to succeed in the meets because there was such a long off season between the end of Fall sports and the beginning of Winter sports.”

Without the consistent practice between sport seasons, athletes would not have been able to compete with their best potential. But, since athletes have been able to practice during the Indoor track season, Coach Scianna believes that, “for those coming back for the Outdoor season, they are primed and ready to go now.” This demonstrates how athletes have been resourceful and utilized time with their fellow athletes to force themselves to be prepared for the new season to come.

The COVID-19 pandemic has altered every aspect of schools, including school sports. Indoor track runners at SHS have done their best to utilize practice time to strengthen their abilities as runners, even though they haven’t competed in any meets. It is still important to have these track practices because it prepares the athletes for other sports they may participate in. Through my conversations with two track runners and the track team Coach, I discovered that they actually enjoyed having no meets as it allowed them to focus on their skills. As always, it is important to be flexible and dynamic, and these skills have been clearly demonstrated by Indoor track runners.