The Round Table • December 16, 2020 • https://shsroundtable.com/uncategorized/2020/12/16/where-you-go-is-not-who-youll-be-a-must-read-for-all-students-applying-to-college/

“Where You Go Is Not Who You’ll Be”: A Must-Read For All Students Applying to College 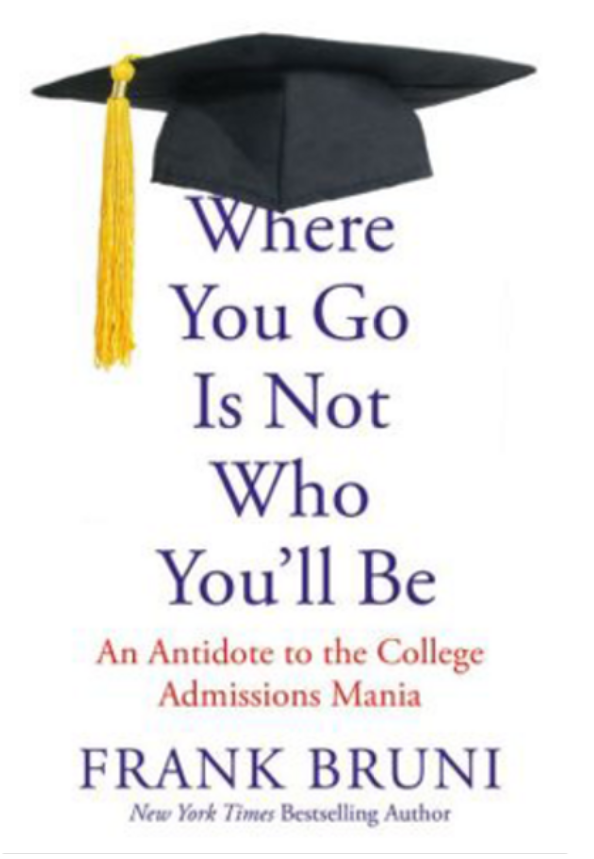 Frank Bruni's "Where You Go Is Not Who You'll Be" offers insight on the college admissions process.

I am a senior in high school, on the brink of finding out which colleges and universities will welcome me to their campuses and which, to my disappointment, will reject me. Even though my parents never sent me to expensive private schools or hired top-of-the-line SAT tutors, I have felt my fair share of pressure to get into a “good” school (with “good” school translating to Harvard, Princeton, or Yale, of course).

As admissions decision release dates begin to roll around, I tried to quell my worries by reading a book which many have claimed has changed their perspective on college. Where You Go Is Not Who You’ll Be by Frank Bruni is, as the subtitle states, “An Antidote to the College Admissions Mania.” What makes this books brilliant is that Bruni does not simply claim that the “prestige” of a certain education is not worth as much as we think, he cites specific real-life evidence to support the fact. Truthfully, he has me convinced.

His evidence includes stories from top business executives and politicians who graduated from less-esteemed state schools, who credit their accomplishments in life to the fact that they didn’t attend their top school and had to work harder to prove themselves because of it. He also cites statistics from various studies to prove that the admissions process itself is flawed beyond belief, and that no high school student should depend on it to define themselves.

The main theme Bruni carries throughout is that there is no one step-by-step process for success. These days, many parents and students feel that a certain GPA and the correct mix of extracurriculars will ensure a top place in society; Bruni argues that a high school transcript rarely translates into triumph in the real world. He says that that is the problem emerging in the workforce: recent graduates of top schools are only set on following the checklist that will lead them towards a well-paying job, rather than giving in to their true passions and interests.

If the book’s message doesn’t have you intrigued, let me just say that Bruni’s writing is actually enjoyable to read. His voice is almost conversational; he shies away from using too much collegiate jargon, and when he does, he always makes sure it is defined and understood by the reader. Furthermore, the book follows a very clear layout with each chapter dedicated to a specific point; this makes Bruni’s thought process easy to follow.

Overall, Where You Go Is Not Who You’ll Be is a must-read for families who are putting their all into getting their children into top-tier schools, because frankly, it doesn’t really matter. Bruni’s mix of both personal stories and statistics does wonders to create a comprehensible and clear case.