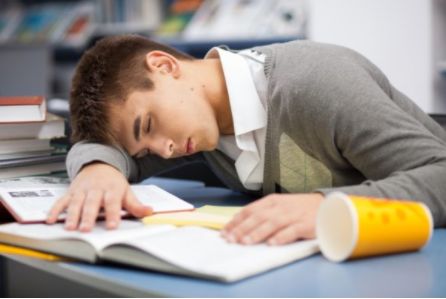 Often in the morning, teenagers have the strong urge to go back to sleep after turning off their alarms. Some are even so sleepy that they find themselves starting to doze off on the ride to school and yawning in class.

Teenagers are supposed to get eight to ten hours of sleep every 24 hours. Most aren’t getting that much sleep due to homework loads, their circadian rhythms, and – having the most significant impact – the times that schools start. Connecticut in particular has some of the earliest school start times in the country.

I surveyed students (via a Google Form) and parents (on nextdoor.com) to determine where they stand on the issue of school starting times. The results were nearly split, but in the end the number of both parents and students who favored a switch to a later start time was slightly greater than those opposed to it.

Survey results showed that students generally prefer a later start time, with the exception of those who are involved with one or more after-school activities. In regard to the current situation hybrid schedule, two students agreed that the day could start later due to the lack of after-school activities, which frees up more time for homework.

“I like the start time when we’re physically in school but, with distance learning, I think a later start time is beneficial,” one student said.

Another replied with a similar mindset, saying, “I think the day could start later, especially during COVID when there are less after-school activities.”

However, a couple of students said that some after-school jobs and the additional workload from AP classes would make an earlier start time more favorable, since a later start time would also mean a later ending to the school day.

The parents and adults who are in favor of later school times often emphasize the well-being of the students and their need for more sleep.

“I graduated from Stamford High in 2017. From personal experience and from what I saw, kids would literally sleep through first period. I definitely think school time should start later. Not only would it benefit students academically, but most importantly benefit their health,” a commenter on nextdoor.com said.

However, the adults against a later start time feel that early hours better prepare students for their adult life.

“Teenagers and parents need to take responsibility. If your school day starts at 7:25 a.m. then you need to adjust your life accordingly,” a commenter said.

“The business world does not adjust its business hours to suit the sleep patterns of their employees.”

“I don’t believe the times should change. This will prepare them for getting up early to go to work one day. Discipline is all you need.”

Studies show that later start times for schools not only increase the mental and physical health of students, but also help them achieve better grades. More sleep can boost productivity and better learning. Other benefits include improved attention in class, improved attendance, less tardiness (including missing the bus), and fewer car crashes for students that drive to school.

In an article published by ScienceAdvances, it reported the Seattle School District delaying school start times to study the potential benefits of a later school start time. The start time for secondary schools was formerly from 07:50 a.m. and was changed to 08:45 a.m., to get a comparison of the results of a pre and post-study that was conducted. The two studies were compared measuring the sleep-wake cycle that was measured using wrist activity devices within the spring 2016 and spring 2017 school year. The test at the end concluded that the extra sleep time improved grades and resulted in less students late to class or school as a whole.

Pub Med, a search engine for topics like life sciences and biomedical topics, concludes that later school starting times are associated with longer sleep durations, less daytime sleepiness, and less tardiness to school. Other studies support the result of improved attention and grades and decreased tardiness rates, but are not conclusive.

In 2017, Greenwich switched the start times of its high school and middle schools. Greenwich High School’s start time was moved from 7:30 a.m. to 8:30 a.m., while the district’s middle schools were moved to a 8:00 a.m. start time (15 minutes earlier than before).

Greenwich Time reported on what happened.

“The GPAs of repeating ninth-graders increased, according to data, while GPAs among 10th, 11th, and 12 graders, non-athletes and athletes alike, decreased,” the article stated.

The article also described a survey that was administered to students to collect data on the effect of later starting times, reporting that “over half of respondents to the April survey reported that the change had not affected tardiness, absences, focus in class and behavior, but more parents believed the later start time positively impacted one or more of those categories than teachers did.”

De la Sierra, a student conducting a project on the change, said that the “divide along income levels has to do with how the later start time affects pick-up and drop-off for households with two working parents.” This can be an important factor that determines whether later start times would work in other districts.

Stamford, for example, uses a “tiered” bus system, in which the same buses are used to transport elementary, middle, and high school students. A later start time for high school would mean an earlier start time for elementary. Parents might object to having to modify their childcare schedules for their young ones. However, if the sleep schedules of elementary school students are an issue, it can be argued that young children are naturally earlier risers than teenagers are.

In any case, like many of the factors influencing start times, the answer to the bussing problem is far from cut-and-dry.

Overall, whether looking at scientific studies, surveys, or general opinions, we find little consensus on the issue of later start times. Valid arguments both for and against changing start times can be made. The issue will continue to be divided and the school times will not be changed any time soon, if at all.