The Round Table • September 30, 2020 • https://shsroundtable.com/uncategorized/2020/09/30/board-of-education-reinstates-family-advocacy-program/ 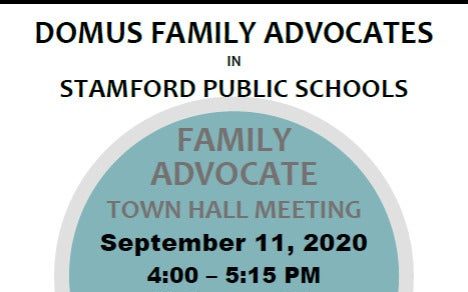 Tuesday, September 23, the Board of Education decided to reinstate its permission for the Domus Knights to expand its family advocacy program to Westhill High School. This decision comes after weeks of backlash stemming from school administrators, teachers, families, students, etc.

Earlier this month, in a narrow decision, the BOE (Board of Education) decided to vote against Domus Knights’ expansion to Westhill and allowing family advocates into Stamford High. In response, many jumped to questioning Board members on their decision.

“It doesn’t make sense,” says Stamford Public School parent and Domus employee, Jessica Vandervoort. Mrs. Vandervoort expresses that the Board decision was counterintuitive for many reasons. She then describes the situation as if  “being in the Twilight Zone.”

The Domus Knights family advocacy program is one of the many reasons that caused people to be puzzled by the Board decision. Family advocates typically help their assigned students with different circumstances ranging from academics, attendance, or home issues.

They’re tasked with not only keeping students in school but out of trouble as well. She further explains that the COVID-19 pandemic has prompted a greater need for their work as families were immediately affected.

Many students in the program, often selected for attendance, grades, and other disciplinary problems, have improved their performance.

As an immigrant, Nikola had difficulty adjusting to school and a different language, but her advocate has helped her immensely. Nikola also aspires to be an interior designer when she graduates.

“I don’t know if I would’ve picked what I wanted to with my future without my advocate .”

In response to the Board decision, Nikola exhibited her disappointment by saying, “I was upset, and there was no point in them canceling it.” According to Nikola, guidance counselors with years of higher education have never guided her the same way her advocate has.

Vandervoort believes that there is disapproval of Domus as a whole within the Board. Following some Board member’s misapprehensions about the Domus Knights, Domus Executive Director Mike Duggan released a seven paged document clarifying and debunking said discrepancies. In response to the initial decision made against Domus Knights, a letter arguing the benefits of the family advocacy program was sent to the Board, including Mayor David Martin. This letter, signed by over 150 people, argues that the program provides utilities to students that aren’t “available from regular school support.” The final paragraph of the letter addressed the contradiction of the Board’s representation of the ideals of Stamford’s parents, teachers, students, and citizens as a whole.

On a rather profound note, one of the last statements written was, “You (the Board) have communicated loud and clear that Black and brown lives don’t matter,” referencing the fact that most of the students who benefit from the family advocates are African American and Latino. Preceding these documents’ release, the Stamford African American Clergy held a conference to denounce the Board’s decision.

It is likely that the many and somewhat angered complaints have prompted the Board of Education to overturn their initial decision as a result of the feedback.