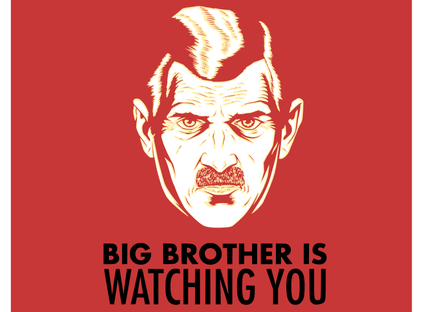 In his novel 1984, George Orwell creates a world where society is under constant government surveillance. He wrote it as a warning message in the year 1949, after Nazi Germany was defeated, but the Soviet Union, with its own version of authoritarianism, was on the rise. The book is still relevant today, a time with cameras everywhere.

Unlike in 1984, however, the power of private companies means the government is not the only threat to privacy and the control of personal information. And with the continued importance of the internet, it is becoming increasingly difficult to keep one’s actions and beliefs private. The instance of a global pandemic further highlights the debate of privacy versus security.

Apple and Google’s recent anouncement of a joint-venture coronavirus contact tracing app was a welcome announcement to some, but a potential red flag to others. In Orwell’s novel, every person’s home contains a telescreen. This technology allows the government to see and hear everything that is happening in the room, all while broadcasting propaganda.

Signs of this are prevalent in today’s society as well. According to the American Civil Liberties Union (ACLU), “a vast but unknown number of Americans’ international calls, text messages, web-browsing activities, and emails” are being tracked by the National Security Agency (NSA).

The United States government has used a fear of terrorism to justify such actions. As Dana Priest explores in her FRONTLINE report, Are We Safer?, such surveillance has only increased since September 11, 2001. The Department of Homeland Security, for example, was established under President George W. Bush’s administration as a direct response to said terrorist attack.

While terrorism should not be taken lightly, the databases that are created from license plate readers and CCTV cameras and local police information, according to Priest, have not actually captured any terrorists in many states. Critics wonder if contact tracing measures could have similar effects.

Because Oceania, where 1984’s main character lives, has a government that first came to power using the principles of English Socialism, there are very few privately-owned businesses. Today’s United States does not have the same issue. In fact, Americans see a similarly large threat to their privacy from companies like Facebook. Critic John Anderson even called the website “a sociopolitical evil” in the Wall Street Journal.

For us, the danger is increased by the fact that personal information in the hands of the national government or a company like Facebook can be released. Top-secret documents from the NSA were leaked in 2013, and user information from Facebook was taken and used for political advertisement without consent. Basically, there are instances today where individual rights are not upheld, which Orwell had discussed, but it has not always occurred as he foretold.

There are other countries where the government has often gone further down the path toward oppression, like China. Paul Mozur and Aaron Krolik of the New York Times have documented some of the technology its authorities use to keep track of the people of China. Police seek to identify people, “find out who they are meeting with and identify who does and doesn’t belong to the Communist Party.” Such a system is fundamentally Orwellian. A recent report in Vox highlighted how certain Asian countries are restricting personal freedoms in the name of suppressing the virus to a degree that most Americans would find unacceptable.

The coronavirus global pandemic means the idea of sacrificing privacy for safety holds significantly more merit for many. One of the most important examples of this is contact tracing to keep track of those whom infected people have been in contact with. In non-pandemic times, this would be written off as a gross breach of individual rights. It would push the United States further down the aforementioned path toward an oppressive, Orwellian society. And unlike other examples of surveillance used in normal times, it is clear that contact tracing would actually increase safety and protect the health of people all around the world. According to the University of California-San Francisco, contact tracing is a necessity for ending the pandemic, meaning giving up some individual privacy would save thousands of lives. This is a necessary sacrifice.

With that said, we must all be aware of what this loss of privacy would entail. Apple and Google, who are working together to create contact tracing apps, are planning on using the Bluetooth signal on smartphones to keep track of whom one encounters. This brings to mind the actions of the police in China and points to the necessity of safeguards. Americans must be able to confirm that their privacy will be restored, and that information regarding who they encounter is not saved, after this global crisis has ended. Journalists must therefore work to spread awareness of how personal data is being used throughout this process in order to make sure individual rights are protected.

In sum, the message of 1984 still resonates today, in the age of COVID-19. Technological advancements since the book was written allow for governments around the world to more easily track the virus, but they have also given individuals a powerful tool to spread information about such surveillance. Orwell was describing a potential situation, and he would not have had any way to know what the future would hold. The power that private companies maintain is an example of an unforeseen layer in the issue. The coronavirus pandemic is another unforeseen layer, making it necessary for individuals to sacrifice privacy for safety. The picture that Orwell painted continues to be relevant because it reminds its audience why it is important to make sure privacy is regained once the virus is no longer a threat.