The Round Table • April 13, 2020 • https://shsroundtable.com/uncategorized/2020/04/13/the-gatekeepers-a-look-into-the-mysteries-of-college-admissions/

“The Gatekeepers”: A Look Into the Mysteries of College Admissions 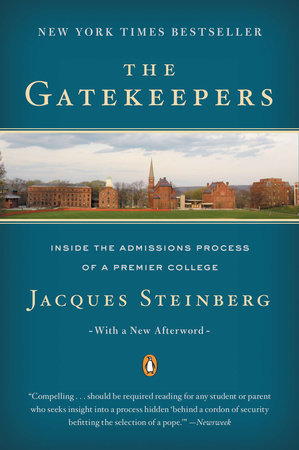 In The Gatekeepers: Inside the Admissions Process of a Premier College, Jacques Steinberg succeeds in outlining the behind-the-scenes world of college admissions. Steinberg, a national education correspondent and staff reporter for the New York Times, reveals admissions secrets that were unknown to the public – or unknown to me, at least. Although a bit outdated (published in 2003), this book does not fail to make points that are still relevant today.

In his research he recorded the actions of an admissions officer at Wesleyan University – Rafael Figueroa. Rafael – or Ralph – takes us along on his journey from recruiting students in the early fall to spending time with the ones who had ultimately chosen Wesleyan as their second home. Aside from Ralph, Steinberg also carefully follows the lives of a small group of high school seniors that applied to Wesleyan, and the decisions that the admissions office made in regards to their acceptance. Each student comes from a different background and story, thus providing insight on how different lifestyles affect admissions decisions. However, as enticing as the personal stories of these people were, what resonated with me most were the lessons – and secrets – that I learned about the college admissions office.

As a junior in high school looking to attend a competitive college or university, I am guilty of constantly pouring over acceptance rates, course selections, and the student-run newspapers of my prospective schools. In my head I pictured the admissions office to be a place with clear-cut rules and stern people looking for any sort of weakness that may appear on my application. I imagined lots of intimidating red pens marking up transcripts to underline their incompetence.

What The Gatekeepers revealed to me was that admissions officers actually care. I know – it may be silly that I never realized this, but after reading about Ralph Figueroa and his colleagues arguing over and worrying for certain applicants to be accepted, I am quite surprised. The admissions officers become fully invested in the lives of their top applicants – at times Figueroa  regretted not putting in a greater effort to get a student to choose Wesleyan.

One of the main things I took away from the book is that everything is considered in the context of your life. Whether it be your SAT score or the grade you got in Spanish class or what school you attend, the admissions officers will judge it based on the opportunities that you were presented with, not on what seemingly better applicants they have to choose from. They want to create a successful and diverse class, not a group of top-SAT-scorers who don’t know the first thing about overcoming struggle.

Speaking of diversity, it is true that minority applicants have an advantage in the college admissions process. Put simply, the fact of the matter is that schools are partially judged on what percent of their student body represents a minority group; so officers jump on the chance to get one to come to their school. If a minority student has a lower SAT score than a white applicant, they may still be accepted over that white applicant. Ralph Figueroa proved this to me many times.

Finally, although not relevant to my own college search, I learned that being an admission officer is grueling work. Most of them spend days on end reading hundreds of applications and fully investing themselves in each one, only to spend more time discussing their decisions with the committee and participating in fast-paced voting sessions intended to determine final accept, waitlist, or reject decisions.

Overall, the book The Gatekeepers was fascinating. The information Steinberg researched and presented is relevant and eye-opening, and I would recommend this book to any highschooler, or parent, who is as concerned about college admissions as I am.