Time to Drop the Puck for Stamford Hockey 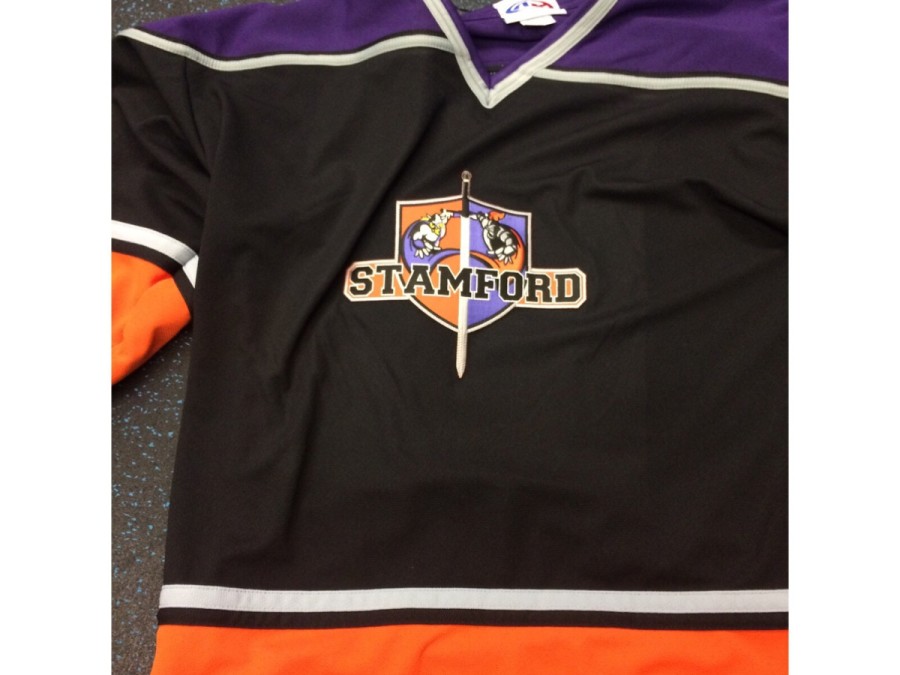 The Stamford co-op team will wear these new jerseys for the upcoming season (photo via Dylan Longo).

It is not often your rivals become your allies, but for the 2016 Stamford High Black Knights and the Westhill High Vikings boys hockey teams, this happens to be the case. Due to the lack of players on each squad, the Black Knights and Vikings will look to rebound from down seasons together.

Senior Dylan Longo said, “It is something new. It is just like anything else you have to get used to.  I’ve been playing with Tuccinardi and Clemmenson since I was little, and I know how they play. Now I have to get used to my new teammates from Westhill. It will be difficult, but I am ready and excited for the challenge.”

The Vikings qualified for the Division III state tournament in 2015 and advanced all the way to the semifinals. Westhill ended up losing 4-3 in overtime to Masuk High School.

With the postseason experience of Westhill, and the young athletes from both sides, the players are hoping to get the best out of each other as they join forces with their cross-town rivals.

“I’m very excited although I don’t feel they are new teammates. They are many of the kids we have grown up playing hockey with. The best part of the co-op is that I think we will be a more competitive team,” said senior forward Chris Clemmenson.

An exciting new addition to the Stamford hockey team is Westhill goalie Christian Compolattaro.  The junior Compolattaro lead his Vikings to a 5-0 shutout victory over the Black Knights last season to win Westhill the Dan Connell cup for the first time since 2006.

The Vikings are losing eight seniors from the 2015 campaign, while the Black Knights will only lose five.

On the Black Knights’ side, there are four returning seniors. Forwards Chris Clemmenson and Matt Tuccinardi, defensemen Dylan Longo and goaltender Connor McDonough are the older members of the Stamford team.

“It’s our senior year. We want it to be the best, and we can’t wait to get things started,” said Longo.

The new Stamford co-op team is poised for a thrilling campaign on the ice. They will kick off their season Saturday, December 12 at the Terry Connors Rink for the annual jamboree. Stamford will face St. Luke’s at 5:00 p.m., King at 5:40 p.m. and close out the night with a match-up against rival Trinity Catholic at 7:20 p.m.

For continued coverage of the Stamford hockey team, visit SHSRoundTable.com and watch broadcasts of select match-ups on the Black Knight Network.