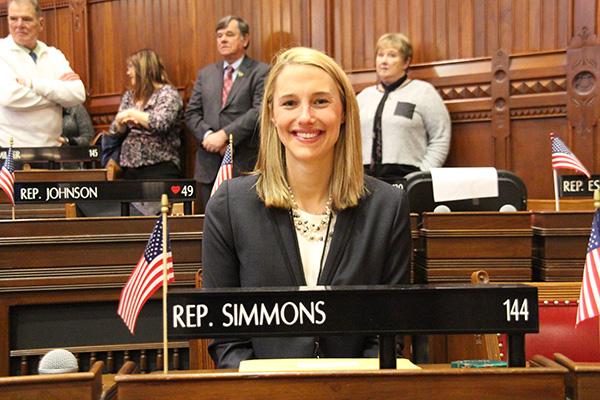 Soon the Class of 2016 will be trading orange and black for the colors of their respective colleges and universities. On Graduation Day, our seniors are sure to be feeling a wide variety of emotions, ranging from pure euphoria from leaving the walls of Stamford High to anxiety over finding a compatible college roommate. Fortunately, this year’s commencement speaker, State Representative Caroline B. Simmons, will be able to squash their fears and impart valuable advice onto our seniors.

TRT: What is one main piece of advice you hope the graduating Seniors remember?
My college graduation speaker (JK Rowling) said the following quote: “It is impossible to live without failing at something, unless you live so cautiously that you might as well not have lived at all, in which case, you fail by default.”…Looking back on my post-high school experiences, the times in which I grew the most or experienced meaningful new opportunities, were the times that I took risks and did not always succeed. I would encourage graduating seniors to take risks and to use moments of failure as positive learning opportunities.
Currently, Representative Simmons proudly represents the 144th District (Stamford) in the Connecticut General Assembly. There she divides her attention between the Commerce, Judiciary and Public Safety Committees. When taking a break from debating and legislating in Hartford, Simmons spends her time participating in countless community events here in Stamford. You will most likely recognize Simmon’s wide smile and extreme friendliness from seeing her at local fundraisers or even from her active campaigning throughout the Stamford community.

Before serving Stamford, Simmons worked at the U.S. Department of Homeland Security as Director of Special Projects in the Office of the Coordinator for Counterterrorism. During the four and a half years she held this position, Simmons traveled to Kabul, Afghanistan multiple times to provide support for Homeland Security’s programs and budgets. Prior to this, she served as an intern at the U.S. Department of State for the Middle East Partnership Initiative within the Bureau of Near Eastern Affairs.

TRT: Before arriving at college, did you have your career/study path planned out? If so, did you end up following through on that same path?
I had no idea what I wanted to do for my career before I entered college. My childhood dreams of becoming a gymnast, and then an astronaut were short-lived…Halfway through high school, the 9/11 attacks occurred, which had an enormous impact on me and the community. I…decided to study Government in college and Middle East studies in graduate school. I then ended up working in counterterrorism at the U.S. Department of Homeland Security, but I never thought in high school that I would end up there, because the Department didn’t even exist at the time!
At 30 years young, Simmons has an impressive academic resume. After securing her Bachelor of Arts degree from Harvard College in 2008, she went on to receive her  Master of Arts degree in Middle East Studies from the Elliott School of International Affairs at George Washington University. Simmons has also studied at The American University in Cairo, Egypt and The Arabic Language Institute in Fez, Morocco. Simmons has clearly had her fair share of both first day’s and commencements.

TRT: What is one fear you had prior to attending college that you can gladly put to rest?

I was scared that I would not be as smart as the other students and that I would not get high grades. But I realized that as long as you work hard and take all of the knowledge you learned in high school and apply it to your classes in college, that you will be successful.

Graduation festivities will begin at 4:00 p.m. on Wednesday, June 15 in Stamford High School’s Boyle Stadium. See Caroline Simmons, as well as other members of the Stamford High community send our seniors off!